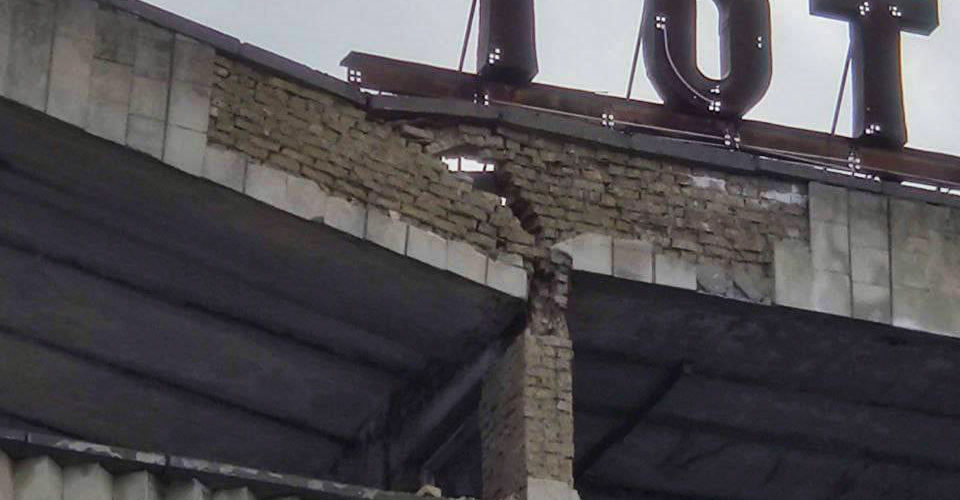 Part of the Pripyat hotel roof has collapsed

The Polesie hotel in Pripyat has started to collapse.

We expected it from 2018, when fragments of the load-bearing wall supporting the ceiling slabs on the observation deck began to fall off. The condition of the building has deteriorated significantly in recent months, leading to only three waterlogged bricks supporting one of the roof panels.

As you can see, they finally gave up and the ceiling on the eastern part of the building collapsed. It can be expected that it will collapse completely in the coming weeks or even days, which may lead to further damage to the building and gradual flooding of the remaining floors.

As if that was not enough, another of the floor slabs seems to be levitating in the air and it is only a matter of time before it will also collapse.

Hotel Polesie is one of the greatest symbols of the abandoned city of Pripyat, right next to the famous Ferris wheel. The building is located on the right side of the representative central square and is characterized by a large observation deck overlooking the entire city center and a large neon sign “Let the atom be a worker, not a soldier”.

People less familiar with the subject may associate this building from the HBO series “Chernobyl” – it is where Valery Legasov slept in the first days after the disaster.