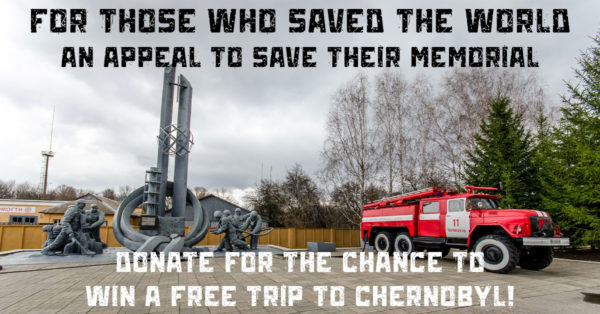 The Firefighters of the Chernobyl exclusion zone and wider Chernobyl community call upon you and all concerned to join the fundraiser for the restoration of the iconic monument, ‘To Those Who Saved the World’.

According to the creator of the project, Ivan Simonov, when the monument was originally built no one foresaw that it would become such an important place of commemoration and that future presidents of Ukraine would visit it to lay wreaths of flowers and honour the memory of the dead.

These days, you can find many photos near the monument, and it has even become an international symbol of the city of Chernobyl, where visitors stop to honour the dead and take photos in memory of the great tragedy of our time. Sadly, however, the monument is under threat…

Unfortunately, as the monument was never officially commissioned, no official body is financially responsible for its upkeep and maintenance.

Therefore, the monument relies solely on donations for this and, after 25 years of very little maintenance, it has begun to crumble and is now in a very bad state.

It is not yet too late to save it though…

How you can help

We are attempting to raise money for the restoration costs. Approximately €7,000 is required for urgent maintenance and, for full repairs and reconstruction, the price is around €17,000.

To kick start the fundraising process, we are organising a special trip to Chernobyl where we are pulling out all the stops. And you could join this trip in return for a donation of just €10!

We are working hard to confirm and finalise the details and already have lots of exciting and exclusive content confirmed. Currently, the provisional itinerary is as follows:

We will do our best to arrange the tour for a time after travel restrictions are lifted, with plenty of notice to all who have a ticket. We are currently working towards a week in Summer 2021.

The team putting this trip together all have many years experience of the zone, and some even lived in Pripyat.

There are many people really putting a huge amount of effort in to make this trip happen, and here are just a few:

Nastya was born in and lived in Pripyat. Her father, Vladimir Tokarenko, was the Head of the Chernobyl Installation Department, Deputy Head Manager in Trust “Yuzhteploenergomontazh”, one of the top experts in the USSR. After the accident, he assisted greatly in the liquidation process.

She can tell you many interesting stories about life after the disaster, including men coming to her house with dosimeters and confiscating items, her father's car being totally contaminated due to graphite, and many more.

Alesya has worked in the zone for a number of years, and has always been fascinated with this special place.

Originally working for Novarka on the New Safe Confinement project, she now works as a tour guide and loves to show people the place we all find so fascinating and teach people about it.

Also of interest, she lives in Slavutych, the city built to house Chernobyl Plant workers after Pripyat was evacuated, and runs her own English school there!

Back in 1986 Alexander lived in Pripyat with his mother, who was the head of cultural department in the Palace of Culture “Energetik”. He was a 10-year-old boy when the accident happened. As with other residents, they boarded a bus and were evacuated.

He came back to Pripyat 1992 and now works with media, movie and TV creators, alongside his own projects about the zone.

Alex aka Hermann explored the Zone since 2010 focusing on its history and science.

Being a graduate computer expert, he is specifically interested in the history of the Soviet computing and information technologies applied to Chernobyl area in pre- and post-disaster period.

Taking up an interest in the Zone following the footsteps his parents, who worked in Chernobyl for a few years after the accident.

An IT specialist, video blogger, and a Chernobyl guide with a true passion for his job, and knowledge of some very special and interesting places inside the Exclusion Zone.

Co-Founder of Clean Futures Fund. The Dogs of Chernobyl program treats the descendants of dogs that were abandoned after the 1986 nuclear disaster.

These animals face hard lives in the Chernobyl Exclusion Zone, constantly fighting for basic necessities like food, water, and shelter during the harsh Ukrainian winters.

Igor worked at the Chernobyl plant since January 1987 for the Radiation Safety Service, he installed a radiation monitoring system with 50 special devices that were placed inside the “sarcophagus”, having been inside unit four many times since 1987.

More recently he has been working as a researcher at the National Chernobyl Museum in Kyiv.

Charlie organises trips to teach people about life in the Soviet Union and about the disaster, how it happened, and what the results were for the people who called the area "home".

Having been exploring and documenting the zone for six years, there is not a street in Pripyat where he has not walked and he knows some very interesting places all over the zone.

How does it work?

For every donation of €10, a ticket will be entered into a free prize draw. You can donate as much as you like, for every €10 you will be entered again, increasing your chances of winning. For every 400 donations of €10, we will draw one name at random to get a free place on the trip. If you wish to simply donate without being entered, please contact us advising of your wishes.

If you would rather be sure of your place on this trip, then that is also possible to secure a place on the trip for a donation of €1,000.

If, over time, you reach €1,000 through €10 donations, then you can contact us and we will guarantee you a place on the trip (and remove your entries from the free prize draw).

This trip will take place after the current travel restrictions are lifted, with plenty of notice and will likely be late Summer or early Autumn 2021, in order for us to be able to see the work undertaken on the memorial using the funds we donated. Every effort will be made to ensure that the trip is at a time suitable for everyone, but eventually it will be your responsibility to get to Kyiv, Ukraine in time for the start of the trip and provide information and documents required for permits.

The winner can transfer their ticket to another person if they wish, however the ticket holder must be aged 18 or over 1 month prior to “Day 1” of the trip. The free prize draw is ongoing until notified otherwise on Contamination.Zone.

The winner will be notified by e-mail within 14 days of the draw date using the email address provided when making the donation.

There is no cash or other alternative prize available.

If you are a winner, we may request you to participate in any publicity or promotion organised by us, including promotional photographs.

If the trip has to be cancelled for any reason, there will be no refund of donations. Every effort will be made to ensure this does not happen.

This offer or these Terms and Conditions may be amended at any time without notice.

The trip itinerary is provisional, and can change without notice.

Not great, not terrible.
BOOK YOUR TRIP