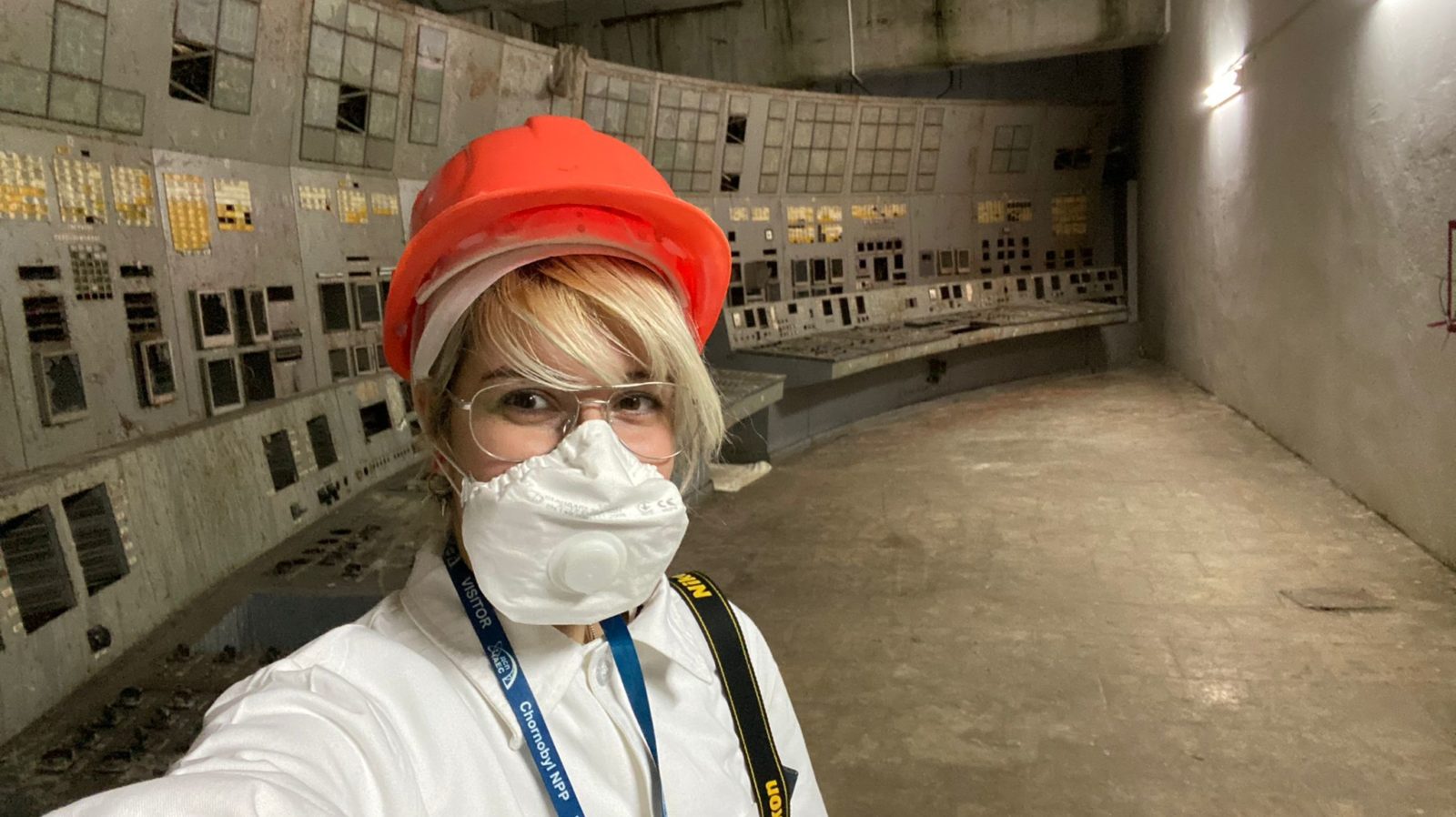 Continuing our tradition of marking the Chernobyl anniversary each year, here are details for the 2022 event/trip.

An evening of socialising, documentaries, education, and most importantly – memorial.

April 26, 1986, Ukrainian Soviet Socialist Republic. An early-morning explosion at the Chernobyl nuclear power plant sends workers scrambling to assess the damage. When reports reach the control room that the reactor’s core is “gone,” deputy chief engineer Anatoly Dyatlov, insisting that’s impossible, sends men to the core itself to investigate. Meanwhile, Vasily, a fireman in the nearby town of Pripyat, is summoned to help put out the fire, leaving behind his wife Lyudmilla, who gathers with other residents of nearby Pripyat to marvel at the strange glow in the distance. As plant workers and firemen quickly succumb to radiation, Dyatlov and plant directors Viktor Bryukhanov and Nikolai Fomin meet with the Pripyat council and insist that radiation levels are not dangerously high; the council subsequently decides to seal off Pripyat and cut its phone lines to prevent the spread of “misinformation.” As sick patients begin to stream into the local hospital, a skeptical academician, Valery Legasov, is tasked by the Central Committee of the USSR to serve as an expert on its Chernobyl task force.

Seven hours after the Chernobyl explosion, Ulana Khomyuk, a nuclear physicist in Minsk, is awakened in her office by a radiation alarm and grows increasingly worried when her phone call to Chernobyl goes unanswered. Lyudmilla arrives at the Pripyat hospital looking for Vasily, whom she learns is being helicoptered to Moscow. At a Central Committee meeting with General Secretary Gorbachev, Legasov objects to Deputy Prime Minister Boris Shcherbina’s assessment that the situation is contained, and Gorbachev ends up sending both men to Chernobyl, where a new reading shows radiation is thousands of times higher than reported. Legasov urges Shcherbina to evacuate Pripyat, but Shcherbina worries about Moscow’s reaction. As reports of the disaster spread to Europe, Shcherbina finally calls for an evacuation, even as Khomyuk makes her way to Chernobyl to warn Legasov and Shcherbina that a second and far more massive explosion is imminent — one that puts the entire European continent at risk.

This collection of archive news reports from 1986 starts from 28 April when the west first learned that there was some sort of problem and then from early May and the middle of May. They portray perfectly the lack of information, lack of understanding, and widespread concern there was regarding both Chernobyl and the Soviet Union in general.

April 30, 1986. After bribing her way into Hospital Number 6 in Moscow, Lyudmilla flouts a nurse’s warnings about limiting her contact with Vasily. With the reactor fire finally contained, Legasov warns Shcherbina that a plant meltdown could contaminate drinking water for 50 million people. Determined to uncover the cause of the explosion, Khomyuk goes to the hospital to interview the men who were on the scene, drawing unwanted attention from the KGB. As miners dig a tunnel under the reactor to stave off a meltdown, Legasov lays out a decontamination plan for surrounding areas that will require drafting hundreds of thousands of men.

The Soviet Union finally admit that people are dying of radiation sickness.

In 1986, Jeff McMullen reported on Chernobyl three months after the nuclear plant disaster, and how the Soviet people were faring the aftermath of the world’s worst nuclear disaster.

21:30: HBO Chernobyl – The Happiness of All Mankind

As mandatory evacuations in the exclusion zone begin, Shcherbina and Legasov bring in General Tarakanov for advice on the use of remote-controlled lunar rovers to remove debris too radioactive for human contact. A young draftee, Pavel, arrives at a military camp, where he’s shown the ropes by Bacho, an Afghan war vet. Khomyuk faces government-censor hurdles as she tries to obtain documents related to Soviet nuclear plants, and at the hospital, tries to persuade a critically ill Dyatlov to explain what happened the night of the explosion. When the radiation proves too dangerous for lunar rovers, Legasov and Shcherbina devise a plan to use men to remove debris with the least possible exposure.

When the Chernobyl nuclear plant exploded in 1986, Viktor Ivkin was only a few meters away from the main control room. He suffered severe radiation burns but survived and later returned to work as a ‘liquidator,’ charged with the task of cleaning up after the disaster. We meet Viktor as he returns to the control room where it all happened 30 years later to talk about that night, his thoughts on the HBO show depicting it, and what he wants people to know about the plight of liquidators.

22:40: Inside Chernobyl with Ben Fogle

The feature length special documentary follows Ben Fogle on a trip inside the Chernobyl Exclusion Zone, thirty-five years after the world’s worst nuclear accident. Ben goes inside Control Room 4 and the New Safe Confinement, before joining local police on a raid looking for ‘stalkers’ – a group who illegally enter the zone in search of thrills – and meets the incredible Self Settlers who came back to live in Chernobyl after the evacuation.

This is an 18-minute excerpt about Chernobyl from a documentary called “Mēs / Soviets”. It was filmed from 1987 till 1989 and directed and produced by a Latvian film maker Juris Podnieks. The program follows liquidators and meets self-settlers who had already returned to their homes.

The European Bank for Reconstruction and Development funded a large part of the New Safe Confinement, and made this video to mark the final commissioning process being completed the day before the 33rd anniversary of the disaster. The NSC is a miracle of modern engineering which encases the nuclear power plant’s damaged reactor. The video features dramatic new footage from inside the reactor turbine hall and the operation to slide the New Safe Confinement into place.

After being congratulated by the KGB for publicly affirming that the Chernobyl explosion was caused by “operator error,” Legasov weighs the price of telling the truth at the upcoming criminal trial of Dyatlov, Bryukhanov and Fomin. As proceedings begin in Chernobyl City, Shcherbina, Legasov and Khomyuk lay out the scientific and human explanations as to what went wrong on the night of April 26, even as Shcherbina and Legasov show signs of deteriorating health. The events inside the control room leading up to the explosion are witnessed, and as Legasov’s testimony comes to a close, he puts his reputation, and perhaps his life, at risk in hopes of preventing another Chernobyl.

The evening is planned with precision so that the explosion on screen happens at exactly 01:23:45, exactly 36 years after the explosion.

A 15 km ride through central Kyiv.

Your tour starts with a short scoot from our shop along the newly built cycle lanes along to Maidan / Independence square. We will stop to let you contemplate historical events at this site and get some great photos of the Independence Monument, Hotel Ukraine and the Tchaikovsky National Music Academy.

It’s then onto St Michael’s monastery – one of the most photogenic of Kyiv’s churches with sky blue walls and a golden domed roof. From here you can also see the high belltower of St Sophia’s Cathedral, one of the most ancient cathedrals from the ancient times of Kyiv Rus, protected under UNESCO world heritage.

We will now ride on to the top of St Andrew’s descent. On top of the hill you can see the majestic St. Andrews Church, the only church in Ukraine without bells. This pretty cobblestone street leads down to the hip and cultural district of Podil and is lined with cute cafes, street vendors and artists. We detour for a moment to take in some great views over Vozdvyzhenka district. This ornately designed district was completed just as the housing market crashed so most buildings laid empty for several years. Now the buildings are slowly being re-inhabited by shops, cafés and restaurants which provide a great backdrop for a picture.

Our tour turns off from St Andrew’s descent to get one of the best views over the river Dnipro from the observation platform. We then follow the newly renovated pedestrian and cycle route along a chain of and under the funicular railway along to the people’s friendship arch. We will stop to let you stand on the glass walkways of the brand new Klitschko glass bridge if you dare and take in some more great views of the river and city skyline. From here you will catch a splendid view of both banks of the Dnipro river, right – with historical Podil, and left bank – with sleeping districts surrounded by old trees and quiet parks.
We continue through the city parks and along to Mariyinski Palace – the official residence of the president of Ukraine. This stop has some great views and nice riding for our scooters and a romantic Lovers Bridge as well an ancient beautiful fountain hidden between lush greenery in the park.

This brings us to the upmarket shopping street of Kreshatyc. This wide yet short road was mostly destroyed during the second world war and rebuilt in the Soviet neo-classic style. On weekends, the street is closed to traffic although on weekdays we will use the wide pedestrian walkways to scoot along.
This route then stops at the popular Taras Schevchenko Park, the Podil riverfront and the pedestrianised Trukhaniv Island bridge.
It’s then a short ride past the Kyiv city sign at city hall for some final selfies and back to return the scooters to the office.

The day starts early, as we will leave to travel to Chernobyl at 07:30 AM at the front of the hotel. We will drive to Chernobyl where we will go through the first checkpoint and enter the 30km zone.

Once in the zone, we will head to Duga for an in-depth tour including Driving School, Control Block, Hospital and School, followed by the Jupiter Factory after lunch with some added locations in the area.

Today we spend the entire day in Pripyat – we will see many things, including:

On our last day in the zone we will see some final cool things in Pripyat and some other villages, alternatively add the ChNPP addon to get to see inside the Nuclear Power Plant locations including Reactor 3 and Reactor 4. In the afternoon we have time to stop in a couple of places before returning to Kyiv.